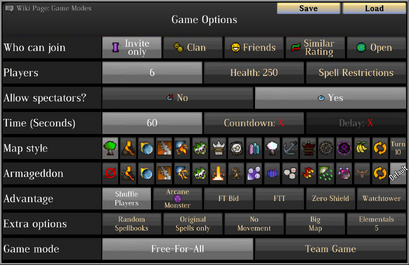 Random Spellbook mode was first added on March 12, 2020 and gave everyone in the game the same random book with the following conditions:

In the patch of May 26, an Original Spells Only game mode was introduced to enable players to enjoy the game as it was originally and to relive their nostalgia. Since its addition, it has been expanded to include a variety of specific balance changes that deviated from Arcanists 1, on top of the restrictions of not being able to use spells from new spellbooks. For more information on the differences between this mode and the base game, please see the main article.

Elementals Mode was released through the December 21, 2020 patch, enabling players to start the game with an additional full spellbook, alongside their already existing 16 spells. The "elemental" spellbook's familiar is powered to a level of the host's choice (0-5) when the game begins and also grants familiar specific spells as long as Original Spells Only game mode is not also toggled in conjunction with this game mode. The idea for Elementals Mode initially came to fruition because only a select few had access to the Arcane Monster and there were requests of adding other types of "Monsters" for different books (i.e. Flame Monster). This mode was meant to be a way to bridge the gap while also keeping the Arcane Monster game mode unique.

As of December 21, 2020, Arcane Zero Shield was replaced by Summon Dragon Egg, and Arcane Zero Shield was instead added as a game mode option. If this is enabled, players cannot cast offensive spells on their first turn. This setting is frequently enabled by players to prevent a turn 1 Arcane Flash off the map.

First Turn Bid was a game mode option added on May 16, 2021 after frequent discussion in the Discord Server regarding FTA or First Turn Advantage. With this mode enabled, players "bid" how much HP they are willing to sacrifice (0-249) at the beginning of the game. The player with the highest bid loses the HP they were willing to sacrifice and goes first, while all other players don't lose any HP.

First Turn Teleport was added as a game mode option on December 21, 2020, with the Dark Fortress Map and is enabled by default on this map as it doesn't currently support custom spawn points. Players start the first turn in water and get a free Arcane Gate, granting them the option to choose their own spawn. Note: If used in combination with Zero Shield, FTT takes precedence and then Zero Shield the turn after.

Watchtower was added as a game mode option on March 4, 2022. Players start the game in a tower which crumbles at the end of their turn, pushing and damaging everything nearby. The player who begins the game with the first turn does not start in a tower.

No Movement was added as a game mode option on October 27, 2021. Players start the game with a single turn where they are able to move their character by jumping or walking. After this first turn players are no longer able to move without the use of spells.

Big Map was added as a game mode option on October 27, 2021. With this selected, if there is 8 or more players in the game, the map will be larger than normal. For each additional player beyond 8, the map will continue to become larger.

Community content is available under CC-BY-SA unless otherwise noted.
Advertisement