Arcanists 2 (previously known as TRA2 or The REAL Arc 2) is a turn-based strategy game. Players take turns to utilize one of sixteen spells, either chosen by the player beforehand or randomized, in order to defeat their opponents. Arcanists 2 can be downloaded and played through the Discord Server or through the Website. All development, bug submissions, and game-related announcements can be found in Discord as well. 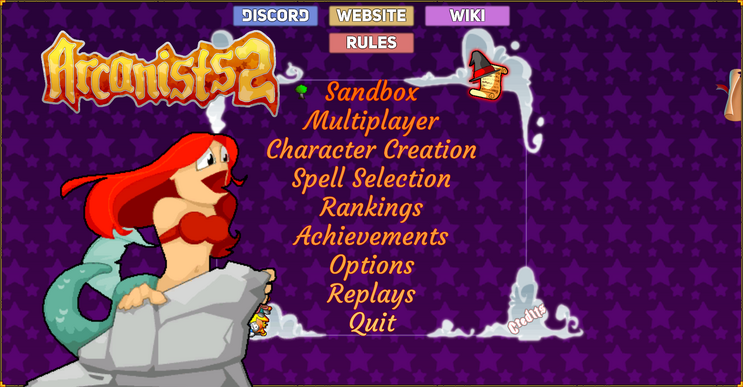 Each player pilots an Arcanist (wizard) who can deploy various spells, some of which deal damage, others that offer protection and utility, or spells that summon minions, which your Arcanist can then command. Every player starts with 250 health and unless they have used a special ability (Soul Jar), will die when their HP hits zero. After the player dies, they may still spectate the game. If the 60 turn limit (found by hovering the timer at the top) is reached, the game will automatically draw. Playing in Sandbox will help you get the hang of movement, aiming, and firing, and is recommended before joining a multiplayer game. It is worth noting that you can customize your spell book and can benefit from examining the options available and reading through spell descriptions as well as book descriptions by hovering the spellbook at the top of the Spell Selection menu. You can also customize your appearance with clothing items in the Character Creation menu and save your full selection for later use.

All of the basic movement actions can be reprogrammed to your liking. This table documents the default control keys:

The mouse is used to target and fire most weapons (left-click).

The arrow keys are used to look around the battlefield, although this will cause the camera to stop automatically following the active player or minion. On your turn C will loop through your team's minions and your Arcanist; on someone else's turn, C will center on the active player and return the camera to auto-follow mode. Pressing Q on your turn will skip it and move on to the next player without you doing any action.

Under certain circumstances, you may find yourself with the ability to fly, or in control of a flying minion. In this case high jump becomes movement upwards, and long jump becomes movement downwards. If your Arcanist has mounted a minion, you have to control the minion rather than the Arcanist. Something important that you must remember is that you cannot attack while mounted on a minion; you can attack but any attack WILL hit the minion, even a bomb will get stuck on it, unless you hold the alt key to make an extended shot in some angles.

Sometimes, it can be difficult to jump from one location to the next if your character is facing the wrong way, as turning around may mean you fall from where you are standing. To change direction without moving, press the F key for the direction you wish to face.

Spells are cast by Arcanists in-game on their turn. Each spell belongs to one of 13 different books, and you can mix-and-match a total of 16 spells to take into battle. If you bring all 12 spells from a specific spellbook, you can gain access to the "Familiar", granting you extra powers.

Arcanists 2 features 14 distinct maps to fight in: one for beginners, and one each for every spellbook except Illusion, and Blood. All the maps except Grassy Hills contain an Armageddon spell that starts firing and continues firing from both sides of the map while slowly converging inwards after all the players have moved 10 times.

There were only two ways to play the original game: Team and Free-For-All (FFA). A team game requires an even number of players and are split up into teams of 2s, 3s, 4s, 5s, or 6s. The host of an unrated game cannot start a team game with an odd number of players. In rated games however, the teams are divided by who queues up first.

Although nothing prevents people from forming informal teams in an FFA game, the handling of turn order between the two styles has an important difference. In FFA the turn cycles through the players, but in team games it alternates between the teams and so offsets a lot of the advantage which would otherwise be gained by eliminating a player from the opposing team. In a 2 vs. 2 team game, if one person dies, their teammate gets double turns to even the difference. In a 3 vs. 3 team game, if two people of the same team die, their surviving teammate gets triple turns.

Additionally, the player limit has been increased from 6 to a maximum of 12, and there are other quality of life features added like Shuffle Players, Zero Shield, FT Bid, and FTT. You can also choose to randomize the map and select a different Armageddon then the one that the map defaults to.

Rating aims to be a quantitative measurement of your skill compared to others in multiplayer games. Players start with a rating of 1000 on account creation, which increases or decreases as games are played. Rating is affected only when you play rated games. The changes in the players' ratings depend on the results and on their ratings before the match. Winning rated games increases rating, while losing decreases the rating. Draws result in no rating loss. Additionally, if you are in a team game and resign but your team still wins, you will gain rating.

Rating is intended as a means to match players with other players of similar skill, so that matches would be balanced and interesting. However, some players value rating highly and as a result there is competition for the highest rating.

At the end of a game, certain awards are given out to the players who did certain things during the match. As a general rule, more awards are given in games with multiple opponents and many turns.

Community content is available under CC-BY-SA unless otherwise noted.
Advertisement